Pinckney to spend some more time in Indian jails 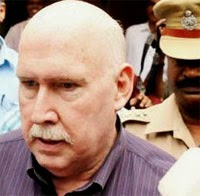 It has been twelve days since managing director and CEO of Amway India Enterprises William Scott Pinckney was taken into custody by Kurnool police. Since then he has been spending his time hopping from jail to jail in the two states of Telangana and Andhra Pradesh. It appears that it would take some more weeks before he secures bail to get released from the jail. There are multiple criminal cases filed against the accused on the charges of indulging in illegal money circulation scheme in the name of selling products.
Any police officer who has a look at the Andhra Pradesh High Court will never think twice to register the criminal case against Amway India. The judgement is well-written and highlights the intelligence of the Indian judges in analysing a racket designed by Amway to loot the gullible people all over world.

Nowhere in the world were criminal cases filed against Amway. It surely is the efforts of an untiring IPS officer VC Sajjanar, who unearthed the racket and brought the culprit to book.
Earlier, he unearthed the racket of Japan Life and Wonder World racketeering. However, whenever he arrested the guilty, the accused used to say that why the police are not taking action against Amway which is following the same business model.


As soon as he assumed charge as the superintendent of police of Economic Offences Wing, VC Sajjanar arrested the kingpins of Amway India and booked criminal cases against the company and its director-members. The rest is the history.
Posted by Shyam Sundar at 18:50