GREED always overwhelms people. There is no other explanation for the Future Retail Ltd, the largest conglomerate which runs chain of Big Bazaar supermarkets and other businesses, launching an illegal business proposal to make easy and quick money.
The Big Bazaar group has launched Profit Club card to enroll members into its illegal money circulation scheme with the promise of huge returns of about 22 per cent interest in the coming 12 months.
The Big Bazaar launched the scheme recently. It is offering Profit Club membership card by collecting Rs. 10,000 from the prospective members. After payment, the members are given a card in which Rs. 12,000 is loaded. The members can purchase 'certain' goods specified by the Future Retail Ltd management in the next 12 months at the rate of Rs. 1000 every month.
Sounds familiar. YES! This is the modus operandi of NMart which launched its membership drive and ended up facing criminal cases throughout the country.
It may be recalled that another group New Look Retail Ltd indulged in similar racket and finally its chief Gopal Singh Shekhawat ended behind bars for considerable time. The AP CID recently attached its properties and bank deposits situated at various places and banks. Its modus operandi is simple. Pay Rs. 5,500 and become a member to avail of 48 coupons each worth Rs. 200 to be exchanged with the goods in the NMart retail stores in the next 48 months. If the members enrolled more members into the scheme, they are paid Rs. 200 per membership. The NMart was not given any relief by any high court in the country and it was finally closed shop.
Exactly, it is going to happen to Big Bazaar too.
It is high time, authorities concerned take note of the illegal activities of the one of the biggest conglomerates in the country and nip it in the bud.
Posted by Shyam Sundar at 23:59 No comments: 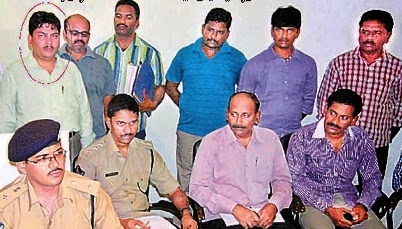 Andhra Pradesh Crime Investigation Department has attached the movable and immovable properties of Surat-based New Look Traders also known as NMart. The fixed deposits Rs. 2.61 crore parked in various banks throughout the country and immovable properties situated in Surat, Gujarat worth about Rs. 9.27 crore have been attached by the CID.
It may be recalled that following a complaint lodged by Vijayawada-based Corporate Frauds Watch, the then superintendent of police of Prakasam District Dr Kolli Raghuram Reddy registered a criminal case against the NMart for indulging in illegal money circulation scheme offering huge returns in a short span of time.
The police have also frozen the accounts of NMart at that time. The chairman of NMart, Gopal Singh Shekhawat, was arrested and thrown behind bars. The Prakasam police have also identified the immovable properties belonging to Gopal Shekhawat in Surat and other places after freezing the bank accounts in various banks throughout the country.
The NMart has mobilised deposits from people of various districts in the then undivided State of Andhra Pradesh and all over the country too. After enrolling members into the scheme by collecting Rs. 5,500 per member, the NMart also induced them to enrol more members into the scheme with an incentive of Rs. 200 per member.
Subsequently, the case was transferred to the CID for further investigation.


The CID officials attached the properties which would be subsequently auctioned and deposited with the government.
Posted by Shyam Sundar at 18:49 1 comment: