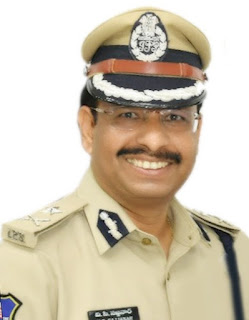 Cyberad Commissioner of Police V.C. Sajjanar
This is a clear cut case of cheating by the Vihaan Direct Selling Pvt. Ltd. Company- A sub franchisee of QI Group in India marketing under brand name of QNet. This case is cracked down by the sleuths of Cyberabad in various parts of Telangana, Andhra Pradesh, Bengaluru and Delhi, in which 58 persons were arrested in 14 cases which were registered against Vihaan Direct Selling Pvt. Ltd. Q Net in different Police Stations of Cyberabad. There are total 30 cases registered against QNet Company in Cyberabad. There are 08 cases which are under investigation with CID, TS.
Vihaan Direct Selling Pvt. Ltd. formerly known as GoldQuest, QuestNet, is a Hong Kong-based multi-level marketing (MLM) company owned by the QI Group. The company invokes many Ponzi schemes and Binary Schemes, Product-based, Vacation Packages etc. business tactics which are illegal.
QNet, the main subsidiary of the QI Group of Companies was founded by Vijay Eshwaran and Joseph Bismark in Hong Kong in 1998. Trevor Kuna (joined Q Net in 2008) who was Chief Marketing Officer is said to be appointed as CEO of Q Net. Michael Ferreira and Malcolm Desai are the shareholders of Vihaan Direct Selling Pvt. Ltd. Now it operates in a number of countries like India, Philippines, Cambodia, Nepal, Indonesia, Turkey, Saudi Arabia, Russia and etc. In India, Q Net has appointed Vihaan Direct Selling Pvt. Ltd. as its sub franchisee. Dilipraj Pokkella and Md. Imthiyaz are said to be the directors of Vihaan Direct Selling Pvt. Ltd.
The Q-net / Vihaan promoters give motivational lectures to the unemployed youth and also to the homemakers stating that there is business project which will yield huge profits to them. Once the customer joins i.e., absolutely by paying cash or on line transaction to the upliner/ Introducer person or to the Vihaan account (Q-net franchisee), an User name and Password will be generated, but the Password  will not be given to the down line ID person and it will be with the upliner only  in the Q-net web.

MO - Business Model:
At first the Q-net / Vihaan promoters say to the new comers that there are various business projects such as Cost Optimization Business, Health and Wellness products, Watches and Jewelry, Personal care and beauty, Tour Packages, Education Packages (SMC MBA Certification) etc,. The promoters trap the new comers with sweet words stating that they will be a part of the Q Net Kingdom where they can build their own future. They say that if the new comers who paid money don’t like Q Net business packages, they can claim their refund within a month. But in fact the promoters will drag the one month period by giving motivational classes, training sessions and also providing books such as The Parable of the pipeline, Questions are the answers, The Business School, Who Stole the American dream, The Copycat Marketing 101 and Talk the talk, to the new comers and tell them to read all the books to gain knowledge over the business.   Once the new comer joins into the Q Net/ Vihaan Business through a referrer/ promoter he becomes Independent Representative (IR). After paying the money the new comer gets some products and the promoter gets commission. The promoter then says to the IR that to get money he/she has to enroll two other members and they in turn join two each other new comers. As the number of persons increases down the line the upliners get more money as commissions.

The Q Net/Vihaan business model is a simple pyramid scheme in which the early entrants earn money and as the number of independent representatives (IR) increases, finding more IRs (New Comers) to join becomes difficult or impossible. IRs that joins late does not earn enough to cover their first outlay and the model collapses. It works as a binary scheme. Down the line the number of persons to be joined becomes difficult or impossible. The scheme collapses at a point of time.
The company has various combinations of product based packages to the new entrants based on their payment. But, the new entrants will not have an iota of knowledge about the products and their quality. They even do not bother to verify the quality of the products as they are interested only in the huge monetary returns the company has promised for them.

Arrests, Search and Seizure:
Total (58) persons were arrested in (14) cases which were registered against Q-net and Vihaan Direct Selling Pvt. Ltd. in different police stations of Cyberabad are arrested. The Godown of Vihaan direct selling Pvt. Ltd. at Bangalore and the office of Transview Enterprises (A Marketing Agency for Q Net products) are seized. An amount of Rs. 2.7 crores is freezed in the Bank account of Vihaan Direct Selling Pvt. Ltd. The bank accounts of accused persons involved in the cases are also seized.
Total arrests- 58 persons
Bengaluru- 05, Delhi- 01, Eluru- 01, Hyderabad- 51

Nativity of the arrested persons:

Background of the Company- its origin and fraud:
The prize chit / benefit / savings schemes benefit primarily the promoters and do not serve any social purpose. – Report of James S.Raj Study Group to the RBI in 1975 on deceptive money circulation schemes in the country.
Qnet (brand under the company Vihaan Direct Selling (India) Private Ltd)  is the latest avatar of the former money circulation companies GoldQuest International Private Ltd, QuestNet Enterprises India Private Ltd promoted by the QI group.
The promoters have been forming new companies as and when the law enforcement agencies start taking legal action against their money circulation frauds based on public complaints across the country. Also, to deceive the new-entrants to their network of money circulation, they come up with new brand every time they legally and socially exhaust themselves.
Their Pyramidal structure of so-called direct sales involves enrolment of a common person based on a payment which the promoters dupe as buying of a product and annual registration fees. Such person will be called an Independent Representative. They receive commissions based on the further enrolments they bring in to the scheme. Such enrolment linked payment of commission schemes are banned in India as per ‘The Prize Chits and Money Circulation Schemes (Banning) Act, 1978’.
But, the promoters of Qnet have been claiming that they are selling products through direct selling mechanism and are not enrolling persons and that the commissions are paid for sale of products and not for enrolling new members.
The promoters have been indulging in deception tactics to circumvent the surveillance of law enforcement agencies and the judiciary.
“In fact, deception is the key to propagate the pyramid schemes as the newly-to-be recruited person is to be convinced of buying the opportunity (i.e., of earning huge and life changing commissions) rather than of convincing him/her of buying/selling the product. Here, the business opportunity is sold i.e., of earning huge commissions and the seller gains only through payment of commissions to him by enrolling more members on his chain. “
Key difference between direct selling and Pyramid schemes :
In direct sales, the person making sales gets maximum commissions and his uplines get lesser than him.
In pyramid schemes, the primary seller at first dose not get anyc omission but as the pyramid beneath him grows, he gets massive commissions far in excess of primary seller/recruiter. This motivates persons to recruit rather than to sell directly to earn huge money.
Deception through products:
Adding a product to the pyramid scheme is the latest trend in the evolution of such money circulation schemes. They target the most vulnerable section of the society. The products are mostly unbranded; sourced from mostly unscrupulous agencies ; are valueless and are sold typically overpriced many times their actual cost in the name of magical remedies or craftsmanship or uniqueness etc. This huge exaggerated margin enable the promoters to pay commissions to some extent.
They falsify all records of accounts, as they totally control the data. The promoters also create false pyramids to siphon of money in the name of payment of commissions.
These kind of companies also pose serious threat to national security as the overseas promoters control huge personal data of persons including government servants and siphon of huge money from the country.
When legal action is taken, the promoters fight vehemently in the courts and approach the victim complainants and they usually try to compromise with the victims by returning their money.  If the victim is socially, economically weak, they try to bully or deceive him/her to silence. This has lead to lot of criminal incidents across the country.
The victims of Qnet and its former companies have formed into an association based in Mumbai and legally fighting it out to bring the promoters to the books of justice and are also putting efforts to create awareness among the most vulnerable sections in society, particularly the youth.
Posted by Shyam Sundar at 21:40 125 comments: