Officials in the South Asian country of Bangladesh have recommended that multi-level marketing be declared illegal in that country. Deception and widespread losses to citizens prompted the recommendation, according to news reports. Among the companies listed in the news report that would be banned is Herbalife.
Developing countries are especially hard-hit by the 99% losses that  MLM companies routinely cause with their alluring but deceptive pyramid pay plans.  However, these smaller countries are also heavily pressured by US government officials to allow MLMs to operate without regulation or law enforcement, much as they do in the USA.

As proof of the validity of the above statement, in March 2012, Allen Stanford (b. 1950) was convicted in a Texas court of 13 criminal charges including fraud, conspiracy and obstruction of an SEC investigation. This week, he was sentenced to 110 years in prison.

The financial press now universally condemns Mr. Stanford as has having run a vast Ponzi scheme. Yet, until relatively recently, Mr. Stanford was widely-acclaimed by the very-same mainstream media as 'the 205th richest person in the USA with a personal fortune of approximately $2.2 billions.' Mysteriously, for many years, no journalist seems to have looked beyond the end of his/her nose and asked Mr. Stanford any searching-questions about the actual source of his apparently limitless wealth.

Mr. Stanford was universally described as 'the head of the Stanford Financial Group' which managed 'capital assets totalling $50 billions for clients in 140 countries.' In the adult world of quantifiable reality, more than 90% of these alleged 'assets,' now cannot be traced. However, it beggars belief that, until his arrest in 2009, no financial regulator ever bothered to look Allen Stanford in the eye, and ask him the one blindingly-obvious question which would have immediately unmasked him as yet another, absurd'economic' alchemist:


'What quantifiable evidence can you produce which would prove that your "Financial Group" has generated any significant revenue other than that deriving unlawfully from its own alleged "investors"?' 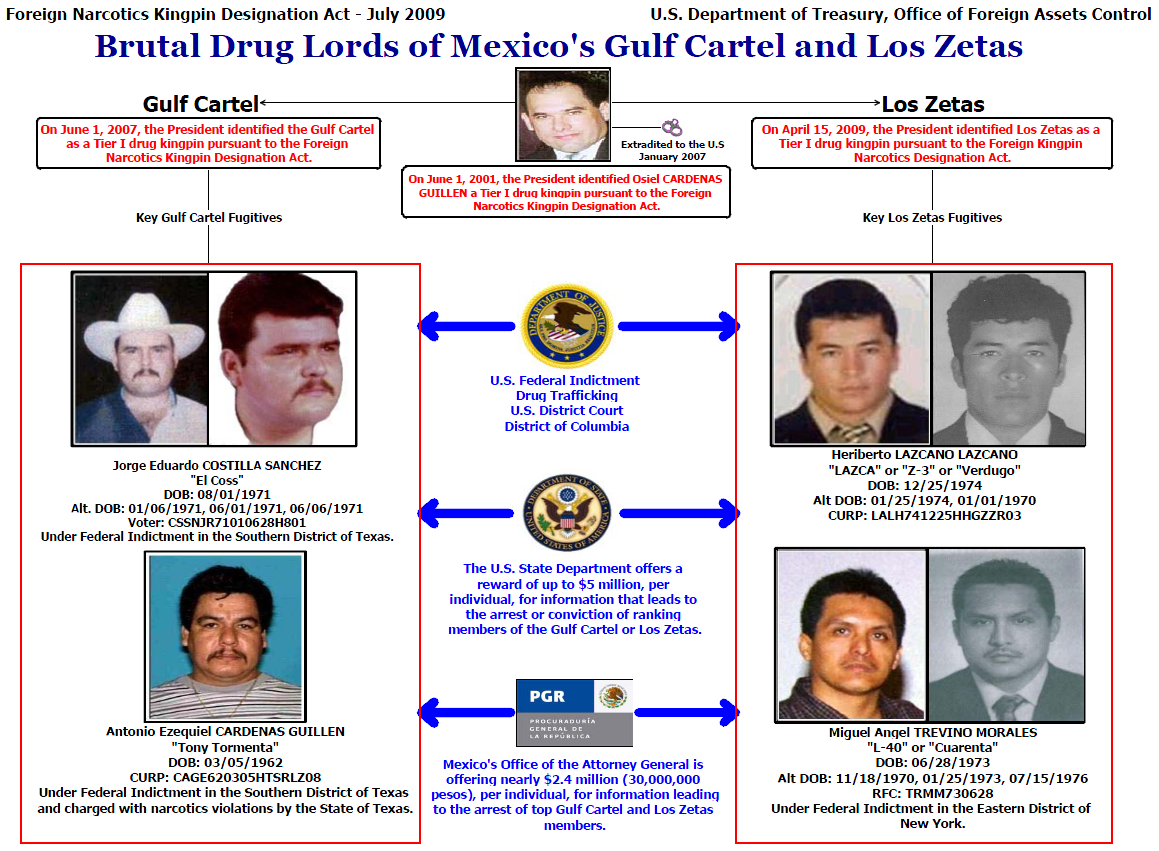 In 2009, it was reported that US federal law enforcement agencies had been monitoring Mr. Stanford's closed-market swindle for almost 10 years and that he had even been suspected of laundering drug money for Mexico's Gulf Cartel.

In 2010, it was reported that, whilst in custody awaiting trial, Mr. Stanford:
In January 2011, it was reported that a federal judge, David Hittner, had declared Mr. Stanford 'too incompetent ' to stand trial (at that time), but that Mr. Stanford had been refused permission to be released to a mental hospital for treatment, because there was a significant risk that his latest claims were part of an elaborate ploy to enable him to abscond.

Self-evidently, Mr. Stanford exhibits the diagnostic criteria of severe and inflexible Narcissistic Personality Disorder. Classically, he has steadfastly pretended moral and intellectual authority, and he has gone to the most extraordinary lengths to prevent, and/or divert, investigation of his clandestine criminal enterprise and isolate himself from liability. He even acquired a presidential-style helicopter and private jets. Indeed, Mr. Stanford still arrogantly refuses to accept that he has committed any crime and he has tried to blame his dramatic fall from grace on various other people, including associates and investigators.

Central to Mr. Stanford's strangely-familiar fraud was the 'Stanford International Bank,' based in Antigua. This labyrinth of legally-registered, but ultimately counterfeit, corporate structures raised at least $7 billions illegally by recruiting an army of salaried commission agents to peddle effectively-valueless pieces of paper arbitrarily defined as 'certificates of deposit.' In simple terms, Mr. Stanford's racket was a pyramid of deception. His agents unwittingly deceived victims with the false promise of a guaranteed annual interest-rate in excess of 10%. Exactly like Charles Ponzi and Bernie Madoff, Mr. Stanford's self-gratifying, and self-perpetuating, game of economic make-believe could only be sustained so long as he maintained an absolute monopoly of information and kept finding more and more ill-informed players. When searching questions began to be asked publicly by a few concerned persons within the world of finance, many of Mr. Stanford's victims demanded their initial 'investments' and imaginary profits. The authorities soon found themselves buried under an avalanche of complaints. Prior to these events, Mr. Stanford had sought to make the truth unthinkable (but actually attracted a lot of suspicion) by significantly increasing the stakes in his already-massive bluff.

Mr. Stanford lived in St Croix in the US Virgin Islands. He owned various luxury properties and a 112ft yacht, 'Sea Eagle' - all of which were seized along with his other illegally-acquired assets. Mr. Stanford is now an undischarged bankrupt with a net-worth of zero. Although American by birth, he also retains citizenship Antigua and Barbuda, where he once was the largest employer after the government. Amongst various local businesses, Mr. Stanford had owned two newspapers. In 2008, Mr. Stanford used part of his ill-gotten gains to stage a $20millions (winner takes all) series of 5 cricket matches between England and his own team, the 'Stanford All Stars,' made up of West Indian players.

Mr. Stanford later apologised to the England team for being 'over-friendly' with some of their wives and girlfriends during one of the matches.

Mr. Stanford also bought association with the glamorous professional sports of golf, tennis, polo and sailing. He once signed deals with popular-golfer, Vijay Singh, and clean-cut, England footballer and businessman, Michael Owen. In this way, both these stars were deceived into endorsing a massive, ongoing fraud.

For obvious reasons, Mr. Stanford personally gave around $1 million to US politicians (but mostly to Democrats). Since 2000, the 'Stanford Financial Group' contributed $2.4millions via its so-called 'Political Action Committee' and employees. In total, more than 100 politicians are known to have received'contributions' (i.e. bribes) from the Stanford organized crime group, including Barack Obama and his 2008 presidential challenger, John McCain. Both these men have since said they would hand back the stolen funds or donate them to charity.

From 'The Universal Identifying Characteristics of a Cult' (David Brear, Axiom Books, copyright 2005)

Self-appointed sovereign leadership. Pernicious cults are instigated and ruled by psychologically dominant individuals, and/or bodies of psychologically dominant individuals (often with impressive, made-up names, and/or ranks, and/or titles), who hold themselves accountable to no one. These individuals have severe and inflexible Narcissistic Personalities (i.e. they suffer from a chronic psychological disorder, especially when resulting in a grandiose sense of self-importance/ righteousness and the compulsion to take advantage of others and to control others’ views of, and behaviour towards, them).* They steadfastly pretend moral and intellectual authority whilst pursuing various, hidden, criminal objectives (fraudulent, and/or sexual, and/or violent, etc.). The admiration of their adherents only serves to confirm, and magnify, the leaders’ strong sense of self-entitlement and fantasies of unlimited success, power, brilliance, beauty, ideal love, etc.

* ‘Narcissistic Personality Disorder,’ is a psychological term first used in 1971 by Dr. Heinz Kohut (1913-1981). It was recognised as the name for a form of pathological narcissism in ‘The Diagnostic and Statistical Manual of Mental Disorders 1980.’ Narcissistic traits (where a person talks highly of himself/herself to eliminate feelings of worthlessness) are common in, and considered ‘normal’ to, human psychological development. When these traits become accentuated by a failure of the social environment and persist into adulthood, they can intensify to the level of a severe mental disorder. Severe and inflexible NPD is thought to effect less than 1% of the general adult population. It occurs more frequently in men than women. In simple terms, NPD is reality-denying, total self-worship born of its sufferers’ unconscious belief that they are flawed in a way that makes them fundamentally unacceptable to others. In order to shield themselves from the intolerable rejection and isolation which they unconsciously believe would follow if others recognised their defective nature, NPD sufferers go to almost any lengths to control others’ view of, and behaviour towards, them. NPD sufferers often choose partners, and raise children, who exhibit ‘co-narcissism’ (a co-dependent personality disorder like co-alcoholism). Co-narcissists organize themselves around the needs of others (to whom they feel responsible), they accept blame easily, are eager to please, defer to others’ opinions and fear being seen as selfish if they act assertively. NPD was observed, and apparently well-understood, in ancient times. Self-evidently, the term, ‘narcissism,’ comes from the allegorical myth of Narcissus, the beautiful Greek youth who falls in love with his own reflection.


For several months on this Blog, David Brear has been offering readers a plain-language explanation of pernicious, blame-the-victim cults in general, and of  'MLM Prosperity Gospel' cults in particular.