It is not sure whether Superstar Amitabh Bachhan  is aware of the fact that police are investigating into the fraudulent practices of RCM, he is promoting the business of this company.
While Rajasthan police are taking on fraudsters who are operating various MLM and ponzi schemes, the state government is working on a bill to curb the MLM menaceThe growing menace of multi level marketing (MLM) and ponzi schemes like Speak Asia are increasingly coming under the scrutiny of several state agencies. After Andhra Pradesh and Kerala, police from Rajasthan have been pro-active in busting such schemes and are investigating the activities of such companies.Recently, the Rajasthan police unearthed a MLM scheme operating under the name of Right Concept Marketing (RCM) in Bhilwara district, famous for its clothing industry. The police are tracking couple of other similar schemes. According to an officer close to investigation, besides RCM, there are lot of schemes offering investment and high returns on gold, while others are selling some kind of products in Rajasthan. The officer, preferring anonymity, told Moneylife that, “We are looking at the financial analysis of these schemes. Generally, they always promise high income on recruiting new people. There have been few complaints from the people. Apart from booking the master-minds of these schemes under the Prize Chits and Money Circulation Banning Act, we have also charged them with certain sections of the IPC (Indian Penal Code).”Recently the bail applications of RCM directors were rejected by the Rajasthan High Court as it found prima facie evidence against them in money circulation scheme.According to police estimates, the fraud is in the tune of Rs2,000 crore. The business model of RCM, was based on networking where it invited people to become member on the payment of Rs1,500. To avail 10% commission they were asked to recruit more people in the scheme. The company is not registered under the Companies Act. “We are closely co-ordinating with different government agencies. For instance, we are in touch with enforcement wing of the Income Tax department,” the officer added.In November, last year, ponzi scheme Gold Sukh made headline after it allegedly duped 1.75 lakh investors for more than Rs300 crore. Gold Sukh promised returns 27 times than the investment in just 15 months and was able to lure many politicians, police officers and businessmen. The Jaipur police are probing the scheme and had also issued a Red Corner Notice, through Interpol, against its absconding directors.According to a news report, Rajasthan chief minister has asked officials to draft a bill against fraudulent MLM schemes against the backdrop of the on going investigation in the multi-crore Gold Sukh scam.
Posted by Shyam Sundar at 17:35 10 comments:

NMart cases to be tried in Guntur of Andhra Pradesh 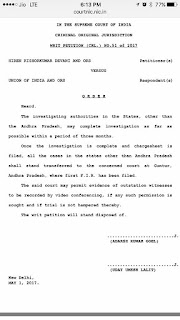 The Supreme Court has given order on May 1, 2017, transferring all NMart cases to Guntur in Andhra Pradesh where first FIR was filed against the company under the provisions of Prize Chits and Money Circulation Schemes (Banning) Act, 1978. The Supreme Court ordered the investigating authorities to complete the investigation as far as possible within three months.

Once the investigation is completed and charge sheet is filed, all the cases in the states other than Andhra Pradesh shall stand transferred to the concerned court in Guntur, Andhra Pradesh, where the first FIR was filed.
The said court may permit evidence of outstation witnesses to be recorded by video conferencing, if any such permission is sought, and if trial is not hampered thereby.
Posted by Shyam Sundar at 21:21 2 comments:

ANOTHER CRIMINAL CASE AGAINST AMWAY

Sandeep Rana
Tribune News Service
Chandigarh, January 11
A local court today framed charges against two Amway India directors, including a foreign national, in a cheating case. The third co-accused director, Stephen William Bedder, is a proclaimed offender in this case.
The charges were framed against William Scot Pinckney and Prithvi Raj Bijlani under Section 420 of the IPC and Sections 3 and 4 of the Prize Chits and Money Circulation Schemes (Banning) Act. There were eight complainants in these three cases.
According to the complaint, as part of a criminal conspiracy, the three accused started a multi-level money marketing scheme and cheated Ramesh Dubey, Narinder Kumar and Inderjit Kaur, co-complainants, by fraudulently inducing them to become members by paying Rs 4,400 each and further induced them to enrol more members for getting commission.
The complaints alleged that neither did they get the promised commission nor the amount paid by them to the company.
“... the accused cheated the complainant under Section 420 of the IPC,” said Akshdeep Mahajan, Chief Judicial Magistrate. They were booked at the Sector 26 police station for cheating.
“...If a member enrols more members, the member on the top gets more commission without doing anything, which is a clear violation of Section 3 of the Prize Chits and Money Circulation Schemes (Banning) Act; thereby the accused have committed an offence punishable under Section 4 of the Act,” the CJM said.