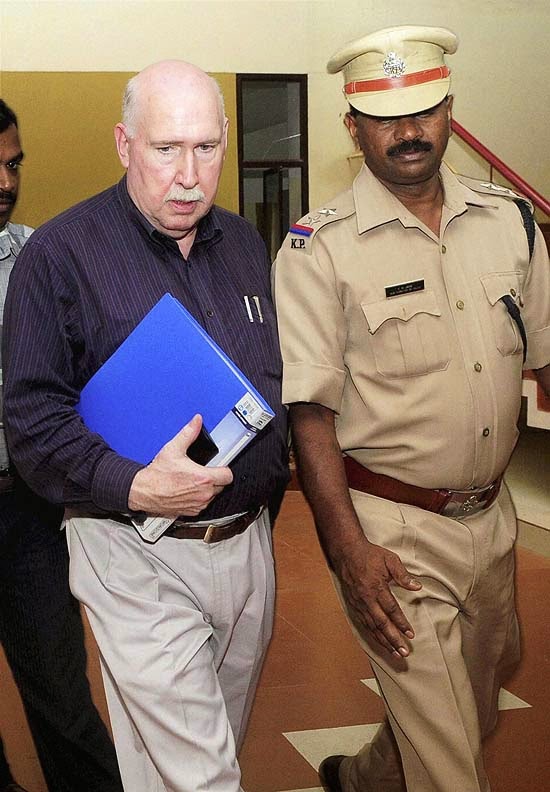 CEO and MD of Amway India Enterprises Mr William S Pinckney is still in jail. For reasons better known to the counsels of Amway India, they have not filed bail petitions in courts where the criminal cases were filed against the fraudulent company. In India, bail is  rule and jail is an exception. It appears that Mr Pinckney is enjoying his jail time with all the facilities he could buy in Indian jails.
In the meanwhile, the Amway India unleashed a huge propaganda blitzkrieg in the media including electronic and print all over the country stating that Mr Pinckney was illegally 'detained'. It appears they do not know the meaning of detention or they do not make the difference between detention and arrest. No judicial court in India will send anybody, let alone an American-Australian citizen, behind bars without prima facie evidence.
The latest is the article published in The Economic Times of India by the US-based chiefs of Amway. What these bigwigs conveniently forget is that India is an independent and democratic country and it has an independent judiciary. Unless there is prima facie evidence, no court in India will take cognizance of a crime and send the accused to judicial custody.
As per the existing law of the land, the business Amway India Enterprises is doing in the country is illegal. The Andhra Pradesh High Court in its judgement based on the affidavit filed by Amway India itself regarding the business model of Amway, stated, "Inducement for aggressive enrolment of new members to earn more commission is inherent in the scheme – Scheme provides for sufficient inducements for its members to chase for new members to make quick  easy money – By promising payment of commission on the business turned out by down-line members sponsored either directly or indirectly by the up-line members constituting a contingency relative to enrolment of members, first petitioner (promoter) is earning quick / easy money from its distributors apart from ensuring its distributors to earn quick/easy money – The two ingredients are thus satisfied in the case of promoter too – Held that the scheme run by petitioners squarely attracts the definition of ‘Money Circulation Scheme’ as provided in Section 2(c) of the Act.. "
As is evident from the contentions advanced on behalf of the petitioners as noted earlier, the petitioners have taken the stand that there is no quick or easy money involved in the scheme and that the money which the sponsor member gets does not depend on any event or contingency relative or applicable to the enrollment of the members into the scheme.  But on a careful analysis of the true nature of the scheme as explained above, it is quite apparent that one of the components of the income earned by a sponsor member is the commission which is calculated not only on the personal PV of the sponsor member, but also from the PV earned by all the remaining 102 members falling within his group.  There is, therefore, no gainsaying that a substantial part of the income which the first sponsor member of the group gets depends on the event or contingency relative or applicable to the enrollment of members into the scheme.  This conclusion can be tested by a further analysis of the income figures given in the earlier paragraph.  Supposing the sponsor member at the top does not introduce any member and if he merely sells the products given to him, he gets an income of Rs.12,420/-.  If he sponsors only six people and they in turn do not sponsor any member, then he will get an additional income of Rs.23,760/-.  If those six members whom he sponsored again sponsor four members each, he will get a further income of Rs.1,14,480/- and if the 24 members sponsor three members each, he will get a further sum of Rs.6,83,300/-.  Thus the money which the member at the top of the line gets depends upon the members whom he enrolls or the members enrolled by him enroll. ( 28).

When the judgement is crystal clear that the company is making easy and quick money in the name of selling products, the American operators have been time and again stating that their business model is legal. The Amway may be running in several countries where there is no law banning illegal money circulation scheme. But in India, there is a law which prohibits illegal money circulation schemes.
Let us look at Section 2 (c) of PCMCS Act, 1978. "Section 2 (c) “money circulation scheme” means any scheme, by whatever name called, for making of quick or easy money, or for the receipt of any money, or valuable thing as the consideration for a promise to pay money, on any event or contingency relative or applicable to the enrolment of members into the scheme, whether or not such money or thing is derived from the entrance money of the members of such scheme or periodical subscriptions:
The law clearly says 'for the receipt of any money, or valuable thing as the consideration for a promise to pay money". Here valuable thing is the product which Amway is offering to its members. There is no ambiguity in the law. The American businessmen are spreading canards time and again that the law is ambiguous.
The long article published in The Economic Times of India has conveniently skips the High Court judgement which pronounced the business model of Amway is illegal. They also do not mention that the Supreme Court of India also upheld the judgement of High Court after Amway India filed a special leave petition in the apex court.
Why there is a hue and cry when a criminal on a proven charge of running illegal money circulation scheme is arrested? There are asking for the release of Pinckney as if he was detained illegally. They could simply file a bail petition and walk out of the jail. But they are enacting a drama to gain sympathy.
If anybody wants to do business in any country, they have to respect the law of the land and do their business accordingly. If anyone acts against the law, he or she will be arrested and put behind bars.

Just go through this article published in the Economic Times of India to know how the American heads of Amway are distorting the facts in the criminal case.


Amway urges government to help secure release of its India head
Amway India's CEO Bill Pinckney was arrested on May 26 at Amway's headquarters in
Gurgaon. At the time of this writing, he remains in police custody. This continued
detention and harassment must end. Amway is a reputable company with 55 years of
operating legally and ethically in more than 100 countries and territories
worldwide.
And while the newly elected Union government in New Delhi played no role in this
police action, we ask their help with the immediate release of Bill so he can be
quickly and safely return to his family. To continue with this investigative
retention when we have fully cooperated with all investigations and requests from
authorities in India - including Andhra Pradesh - is unnecessary and unreasonable.
Whenever our business model has been questioned, we have shown up to provide
answers. We have made every effort to be entirely transparent and forthcoming with
authorities. If there is a problem, we want to fix it so we can continue to do
business in India.
The underlying issue at hand is the lack of clear direct selling regulations that
distinguish legitimate businesses like Amway from dishonest ones.
Additionally, provisions of the Prize Chits and Money Circulation Schemes
(Banning) Act seem to be misapplied against Amway. An amendment to this Act - or
even new legislation - is something we have been working toward for some time.
Hopefully, these recent events call greater attention to the immediate need for
fair and balanced direct selling legislative guidelines. Fortunately, the newly
sworn in Modi government's probusiness agenda is actively working to create an
environment that will welcome foreign direct investment. This makes us hopeful we
will be able to collaborate with them to find solutions that work for everyone.
With similar situations in other markets in the past, we have successfully worked
alongside government officials to resolve issues and we feel confident we can do
the same here.
Since opening in 1998, we have seen firsthand the potential this market holds.
Amway India has grown into one of the top 10 global markets for the company,
selling more than 140 high quality products - most of which are manufactured in
India. We employ close to 500 people and have more than 550,000 distributors
across the country. Our philanthropic efforts in India have helped nearly 100,000
children including visually challenged students in in need of educational and
vocational tools.
Amway is not alone in seeing the opportunity in India. The World Federation of
Direct Selling Associations brought industry CEOs to India earlier this year to
learn about doing business here. They too saw this potential firsthand and left
feeling excited about their prospects for the future. Events like this however,
may cause them to rethink investing in the Indian market.
Despite the challenges we currently face, we remain firmly committed to doing
business in India. We will not abandon the hundreds of employees and hundreds of
thousands of distributors who are working to build businesses for themselves and
their families. In fact, we will continue to expand our investment in India in
many ways. This includes a new USD $100 million state-of-the-art manufacturing
facility in Tamil Nadu. Our goal is to help Indian citizens reach their potential
through a business of their own. When we say we're committed to their success, we
mean it.
To be clear, our top priority is the immediate release of Bill. We will continue
to answer any questions any person may have about our business. And we stand ready
to work with India's new Union government to develop clearer direct selling
legislative guidelines to ensure events like this never happen again.
(The authors of this article are Amway Chairman Steve Van Andel and President Doug

Shyam - Amway's reality-inverting propaganda is a clear attempt to obstruct justice in India in order to continue to commit fraud.

These latest crimes form part of an overall pattern of ongoing major racketeering activity (as defined by the US federal Racketeer Influenced and Corrupt Organizations Act, 1970)which stretches back to 1959.